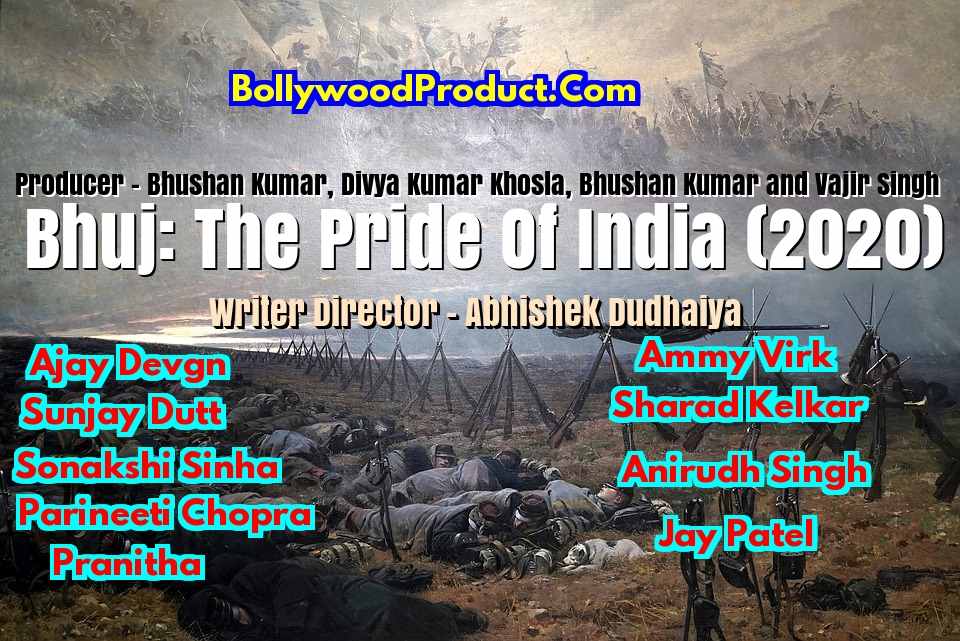 Bhuj: The Pride of India (2020) is an upcoming Bollywood War Action Biographical Movie scheduled to be released on 14 August, 2020. The released date is expected to be postponed further as such the whole country is under Lock Down due to Corona epidemics.

The movie is being produced by Bhushan Kumar, Divya Kumar Khosla and Krishan Kumar alongwith Vajir Singh. The movie is being directed by Abhishek Dudhaiya who is a Television Hindi Serial Director and making his debut as Bolllywood director.  The movie has also been written by him.

Bhuj: The Pride of India depicts the incidents during the Indo Pak War of 1971 and glorified the brave and intellectual act of Squadron Leader Vijay Karnik. How, Vijay with the help of Ranchordas Pagi (Sanjay Dutt) and other 300 local women reconstructed the Indian Air Force Air Base at Bhuj which was next to impossible in the then scenario.

During the Indo Pak War of 1971, the Bhuj Airport was attacked 35 times by Pakistani bombers in 14 days.  The entire airport was rebuilt in merely 72 Hours in the leadership of Vijay Karnik wo with the help of Ranchordas Pogi and one more Flight Officer (Ammy Virk). The impossible task of reconstruction of the Airbase was done with the help of 300 women from the nearby village Madhapar who later rewarded Rs. 50000/- by Indian Govt.

Music and Songs: Musical Duo Vishal and Shekhar have been assigned to compose music for the movie Bhuj: The Pride of India. However, no song has been released till date.

Acting: Ajay Devgn has done many War Action Movies like Army Major (1998), Zameen (2003), LOC Kargil (2003), Tanhaji: The Unsung Warrior (2020. Similarly, Sanjay Dutt is presently filming for Shamshera and Prithviraj which are War Zone Movies. He has also done a War Movie Panipat (2019). Sonakshi Sinha has grown as an actress with her recent movies. Ammy Virk is making his second Hindi Film after 83 (2020) which is yet to be released. Sharad Kelkar and Rana Dugupati are quite mature actors and we can expect something new and exciting from them. Nora Fatehi has not got much opportunity to show her acting talent in the movies. However, she has the opportunity to prove her command over acting in addition to her incredible dance skills. However, it is gathered that Nora Fatehi is replaced by Parineeti Chopra for the character of Henna Rehman.

Since, great actors are there in the movie, expectations of audiences’ increases accordingly. We hope to see a very good performance by the actors.

Direction: Abhishek Dudhaiya is making his Bollywood debut as a director. He has done more than 500 TV Serial Episodes as a director. Hence, it would be interesting to see his directorial capacity in Bollywood especially when he gets such a big opportunity even in his maiden attempt.

Script and Screenplay: The movie is written by Abhishek Dudhaiya which is based on the real life character of Squadron Leader Vijay Karnik and some his colleagues who done an unbelievable task reconstruction of completely destroyed Bhuj Airport with the help of nearby local women and without taking any out the help of professional  technicians. Moreover, it was done in merely 72 hours, beyond the imagination of anybody else.

The movie is expected to be released during independence week of 2020. A good performance is anticipated by the movie in which Ajay Devgn and Sanjay Dutt playing the lead male characters. A full Review will be published as soon the movie is released or premiered.