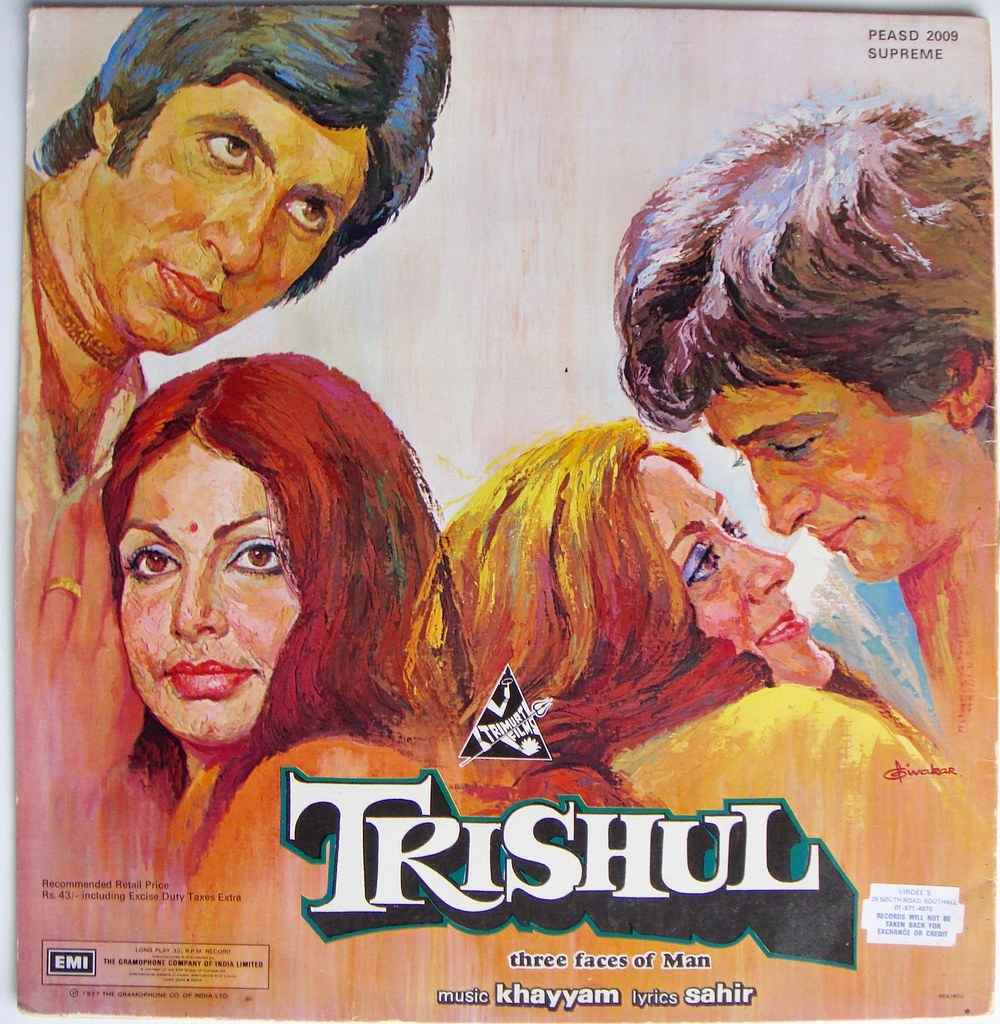 Movie Synopsis: Vijay (Amitabh Bachchan) is illegitimate Son of R. K. Gupta (Sanjeev Kumar) who left his mother Shanti (Waheeda Rehman) when she was pregnant and married to Kamini (Gita Sidharth) daughter of a wealthy business. Vijay Grows and starts defeating R K Gupta on every field to make him zero.

Trishul (1978) Full Story:  Raj Kumar Gupta (Sanjeev Kumar) and Balwant Rai (Prem Chopra) are working as Engineer in the company of Dindayal (Manmohan Krishna). Since Gupta is a very honest and hardworking employee Dindayal is very pleased with him and wants to marry her daughter Kamini (Gita Sidharth). This makes Balwant jealous of Gupta. R K Gupta, on the other hand, is in love with Shanti (Waheeda Rehman) a clerk and brings her home to meet her mother who denies their collaboration and wants her son to marry Kamini. Gupta marries to Kamini and left Shanti without knowing that she was pregnant at that time and gave birth to a baby boy named Vijay.

Years later R K Gupta becomes a big name in the Construction Industry and Balwant Rai also owns a big cement company. Vijay (Amitabh Bachchan) has now a grown man and starts a construction company that too with the help of R K Gupta and starts defeating him in very game of business by any means. During this he comes across Geeta (Rakhee Gulzar), secretary of R K Gupta and falls in love with her. Geeta is fired by R K Gupta assuming she has helped Vijay to win him every business battle.

Shekhar Gupta (Shashi Kapoor) returns from foreign and also becomes active partner in her father’s business empire. He loves Sheetal Verma (Hema Malini), a manager of big company. Vijay though wants to get them separated but Sheetal also reciprocates positively towards Shekar.

In another parallel story Bubly (Poonam Dillon), daughter of R K Gupta, loves Ravi (Sachin Pilgaonkar), an ordinary worker in Gupta’s company. Gupta cannot tolerate this and sacked Ravi from the job. Vijay decides to make Ravi and Bubly together by getting them married. However, Shekhar comes to know about this and want to finish Vijay.

On the other hand, to take revenge from R K Gupta, Vijay wants to get a project for constructing a big society. However, R K Gupta makes a foul play and obtains the project. This enrages Vijay and he buys very plot in front of the future projects of Gupta’s and decided to construct Shanti Society and to sell them in half rates as compared to Gupta Society. This makes R K Gupta annoyed and he gives Rs. 5 lakh to Balwant to kill Vijay.

Music: Background Music and songs have been composed by Mohemmed Zahur Khayyam. Background music is very slow and comes only when it is required. There are seven songs in the movie and most of them are very popular even these days. All songs have been penned by lyricist Sahir Ludhiyanvi.

Being a Yash Chopra Move songs are the soul of the movie like any other Chopra’s Movie. Out of seven four songs were very popular at that time and even in these days too.

Acting: Amitabh Bachchan is centre of the movie and the entire movie revolves around him. Sr. Bachchan was heartthrob during 70s and 80s. It was a time when the Superstar Throne of Rajesh Khanna was started stumbling. Amitabh Bachchan is more than an acting school and needs not anyone’s citation for his acting talent. As an illegitimate Son his expressions and emotions are extraordinary.

Sanjeev Kumar first plays a timid young man who is very obedient to her mother and left her girlfriend because her mother wants him to marry with a rich girl. Thereafter he plays character of a rich contractor who wants his jobs to be done on any cost. He is a perfect example of method acting.

Rakhee Gulzar as a secretary of R k Gupta does her job with honesty and as an intense lover of Vijay is good. Though her screen presence is very low yet looks good.

Shashi Kapoor, Hema Malini, Sachin Pilgaonkara and Poonam Dhillon are merely in supporting roles and they don’t get much screen space except one or two songs.

Direction: It was the third consecutive successful alliance of Yash Chopra and Amitabh Bachchan after Deewar (1975) and Kabhie Kabhie (1976). Yash Chopra knew the nerves of audience and he did the same in the movie. The treatment given to the movie is brilliant as such audience know everything even about the climax still they still enjoy the movie till the end.

The movie was nominated in the six categories in the 26th Filmfare Awards. These nominations include Best Film, Best Director, Best Actor, Best Actress, Best Supporting Actor and Best Story.  Amitabh Bachahan was nominated best Actor for three Movies Don, Muqqadar Ka Sikandar and Trishul and he won the same for Don.

Trishul is a revenge drama which is amalgamated with lots of emotions and filmy masala. The movie represents every class of the society like R K Gupta represents the upper class. Vijay represents common man who and a special class of people who could go to any extent to achieve their aim/revenge.  Ravi and Bubly represent adolescence generation. Geeta, Kamini and Shanti represent the common woman of the societies. In short the movie is for all with family. Though there are some lacking in the movies too many exaggerated dialogues and sometime slow pace of movie. Inspite of these odds the movie is a very good watchable movie is a worth watching even in these days.